Marianna Chantelle Hansen (born 17 February 1983), known professionally as Shaya, is a Greek singer of Danish, Eskimo, Guyanese and Native American descent. Shaya was a member of the girl band Hi-5, the result of the Greek version of the talent show Popstars.

She is currently pursuing a solo career

Shaya was born in Denmark to a Danish father and a multiracial Guyanese mother of Greenlandic and Indigenous descent.

The family moved to Sweden after her parents’ divorce when she was 6. At the age of 12, Shaya and her family immigrated once more, settling in Thessaloniki, Greece. Her mother was a disc jockey before Shaya’s birth.

Although Shaya enjoyed singing and dancing from a young age, including performing with Samba Schools in Copenhagen Carnival, she became interested in becoming a singer by luck when she was persuaded to get on stage to sing a song with co-workers after work at a club she worked at in Kavala around age 18. 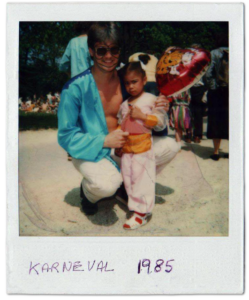 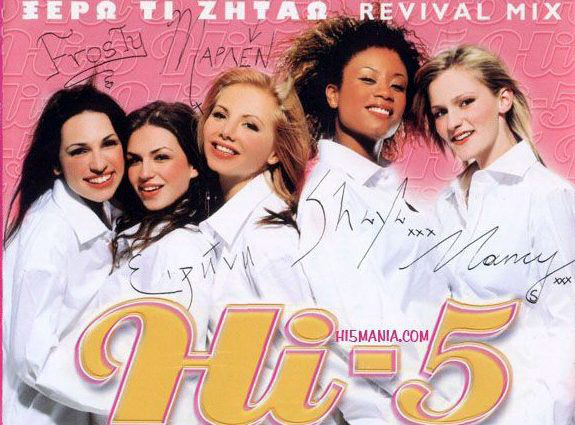 In 2001, Shaya released her first solo single titled “Release Me” and promoted it around Europe. Between 2001 and 2003, she performed in many clubs in Thessaloniki. Following the encouragement of a friend, in 2003 Shaya entered the Greek version of the talent show Popstars and won a spot in the girl band Hi-5.

Shaya, along with the four other girls, Marlen Angelidou, Irini Psyhrami, Froso Papaharalambous, and Nancy Stergiopoulou, had two chart-topping albums and eight singles in two years. The band decided on an amicable split in 2005 after the contract with their record label expired.

After Hi-5 split up, Shaya began a solo career, appearing live in various venues. In 2008, Shaya and Greek singer Kostas Martakis were chosen to record a Greek-language version of Right Here, Right Now from the soundtrack of the Disney film High School Musical 3: Senior Year. The cover was titled “Mikroi Theoi” (Little Gods) and was released as a single from the Greek edition of the film’s soundtrack; a music video followed with Martakis and Shaya molded together with scenes from the film. The music video was included as a bonus feature on the Greek edition of the film’s home video release. Walt Disney Records, via its international distribution partner EMI, commissioned several local market, foreign-language versions of songs from the entire High School Musical series, although “Mikroi Theoi” was the only Greek version song.

In 2009, Shaya teamed up with Greek hip-hop group Stavento to release the duet “Prin Se Gnoriso” (Before I Meet You), which garnered them a nomination and win for Best Video-Clip Hip-Hop at the 2009 MAD Video Music Awards. Later that year in 2009, Shaya also teamed up with rapper Stereo Mike to release the duet “Esi Kai Ego” (You and I), while she was also part of the Amita Motion Tour 2009.

In 2010, Shaya signed with the newly created management, production, and artist development company My Group, active in the dance-pop and club music markets, as well under contract with Sony Music Greece. In May 2010, she released the single “Paizis”. In June 2010, she teamed up with Greek DJ and fellow label mate Mark F. Angelo for the song “Far From Everything”, which was also chosen as the theme song for the 2010 MAD Video Music Awards, and became a summer hit. The duo also recorded the song “My Radio”, which became the official jingle for MAD Radio 106.2. Both songs were featured on Mark F. Angelo’s debut album Play.Pause.Stop.Rewind. Following the collaboration, Shaya released the first single from her debut solo album in November 2010 titled “In Your Eyes”. She released her debut solo album titled Resurrection in January 2011. Shaya penned music and lyrics to a number of the tracks on the album.

In July 2011, Shaya and Mark F. Angelo were chosen as the opening act for David Guetta’s concert in Montenegro. In late 2011, Shaya along with Mark F. Angelo earned the win for Best Greek Act at the 2011 MTV Europe Music Awards, for their collaboration on the single “Far From Everything” as well as several other track collaborations between the two artists. The duo was also shortlisted for Best European Act. In November 2011, Greece’s version of Dancing on Ice premiered on ANT1 featuring Shaya as a contestant. She finished fifth in the show.

In December 2011, it was reported that Shaya was in the recording studio recording material for her new album scheduled to be released in the new year. The album was to feature more house and dance elements and less pop elements than her previous album. Following the closure of her record label Sony Music Greece, the album did not end up being released.

In 2013, Shaya performed a cover of “Walking on Air” alongside Anise K and Ivi Adamou at the Mad Video Music Award 2013. Later that same year and into 2014, Shaya took up a residency at the newly opened Fleurs nightclub at the Radisson Royal Hotel in Dubai. In between shows, she also held one of three lead singer roles in the musical Priscilla, at the Badminton theater in Athens.

During summer 2014 Shaya toured around Greece performing together with other artists. She also visited Denmark to record some songs for her coming solo album, and had 2 performances at the week-long festival Køge Festuge close to Copenhagen.

In December 2014, she began a residency at Fotaerios club in Athens.

In February 2015, Greek broadcaster NERIT announced that she was selected as one of five acts bidding to represent Greece in the Eurovision Song Contest 2015. A national final to select the act took place on 4 March 2015 and Shaya placed 3rd out of the 5 acts. Shaya is currently signed to the record label Planetworks.

That same year she collaborated with Dino MFU with the song I’m in love released by “Zero 10 records” and also a song with BO called “Kalokairini kardia” released by Cobalt Music.

2016 began with a contract with spider Music in Greece to release 2 albums and make world ide promotion of the album together with Sony Turkey. Shaye co-wrote and co-created the album and did the lyrics during 2016 and 2017.

The first solo track from the coming album was released. The music video “MΑΖΙ και ΜΑΚΡΙΑ” from Shaya’s coming album “Stronger” is released. Also 2 strong remixes of the song with the popular Greek DJs, Lolos and Pan Gikas were released

I 2016 Shaya teamed up Greek artist KonCept and released the music video “Dirty talk”, entering the Top100 in several charts around the globe.
Shaya also sang, acted and performed in the Broadway musical Sweet Charity, at Badminton Theater in Athens in 2016.

I 2017 the title song from the album to come, ‘Stronger’ was released. Unfortunately, Spider Music did not do any promotion and Shaye terminated the contract. Spider Music released the album, since they owned the actual recording. The songs from the album ‘Stronger’ can be found on all major platforms. Shaya is considering recording a new version of the songs and release it herself or with another record company. I January 2021, she released some remixes of Stronger.

I 2017 Shaya also gave birth to her son Iasonas (Jason) in Athens.

During the winter 2017-2018 Shaya moved to Denmark for 9 months, to be part of the Broadway musical ‘Book of Mormons’ at ‘The new Theatre’ in Copenhagen, singing in Danish language and performing several roles in the play.

In 2019 Shaya performed at the Zvoulias Fashion show, Mykonos, Greece.

Then she went to the studio and recorded Yolo, and made a music video with Rockfellas in a Greek language ‘Fregg’ as well an English language version ‘Yolo’

Shaya released the music video ‘Searchin’’ by DJ Freespirit, recorded at Mykonos.
She also released her solo music video ‘Feel my love’.
Shaya married Theodore Papantonis and Iasonas got Baptized, at a ceremony at Lefkas, Greece.
During Spring Shaya performed in different shows at On Air, Epsilon, Open TV and MAD TV in Greece.
During winter and spring Shay performed at several clubs in Athens and Saloniki and Summer 2019 performed regularly at Kalua, Mykonos, Greece.

In November Shaya was invited to sing at the Wienna Awards, Austria.
In December she performed in Sofia, Bulgaria and then went to sing in Onima in London for New Year celebrations.

In January 2020 Shaya performed in Cairo, Egypt and in March she performed at McLaren Mc Car presentation, Barcelona, Spain
During the corona period Shaya worked at her new business project Shaya Creations, making and selling ecological hair and body products.
She also streamed cover songs live from her home in Athens, at her Instagram account.

In March 2021 she released the music video Gravity with VSAG.
In November she featured singing at the Unstoppable – ‘The mixtape Archives’.

During summer 2022 Shaya performed regularly at ‘The Garden’ and ‘SantAnna’, as well as other places at Mykonos, Greece, and also gave some shows at Crete, Greece.

She released the single ‘I am free‘ with Italian composer Kanella, which was quickly after released in a dance remix version.